Cry of the Hawk • September 24, 2020 • https://cryofthehawk.org/news/2020/09/24/student-wins-miss-maryland-agriculture-contest-event-held-online-this-year/ 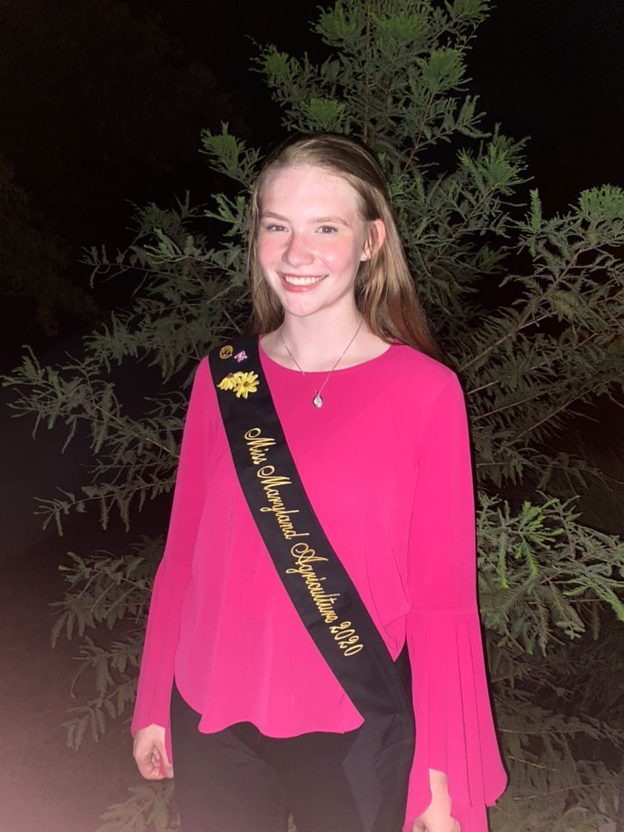 Keehan poses for a photo after winning the Miss Maryland Agriculture title. She competed in the event online.

According to Keehan, “the Miss Maryland agriculture contest is an 80+ year old event that happens at Maryland state fair each year.” She competed against 15 other girls who won their county farm bureau contest over zoom where they were judged on their public speaking skills, agricultural, state fair, and farm bureau knowledge

“Each year four runner ups and one winner are selected and they will travel around the state promoting agriculture at different local and legislative events,” she says.

The junior found out about the contest when she started showing cows at the state fair about five years ago. “I knew that I wanted to compete so in June I ran for Miss Harford county farm bureau and won so I was entered to compete for Miss Maryland agriculture” she says.

Keehan was disappointed that the event wasn’t held in person this year because most years the contestants get to compete at the state fair and get to know the other contestants but that couldn’t happen this year.

Instead, they had an interview and three round table discussions where they talked about different agricultural topics over zoom. And what would’ve been on stage, which was a 90 second speech and a fish bowl question, was pre recorded.

Keehan says “even though it wasn’t what I expected, it really helped me learn how to connect with people virtually and since a lot of the events I do will be virtual it helped me prepare for them.”

Later in the year Keehan will do school visits “where [she] join[s] classroom meetings and talk[s] to younger kids about agriculture,” she says. The Maryland farm bureau convention will be virtual this year so she will be attending that as well.

“During the state fair’s virtual livestock show I helped pick the fair family of the day. If we had a traditional fair, me and the other girls would pick one random family each day and they would win free tickets and a tee shirt,” she says.

“Instead families entered on Maryland state fairs Facebook page by posting a picture that relates to the topic of the day in the comment section. Me and the runner ups voted for who we liked best,” she says. According to Keehan, the winners for each day won four tickets for the 2021 fair and some tee shirts.

She also made videos talking about what was going on at the fair from horse to livestock shows and added some fun facts about each of them.