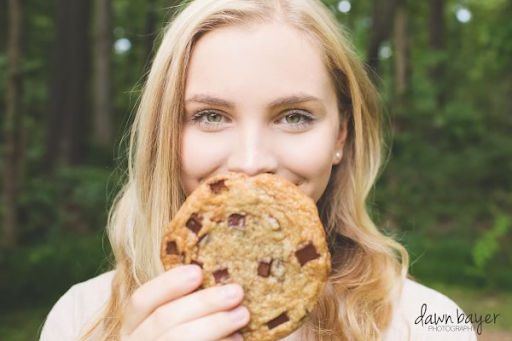 Birchfield is in the second year of her entrepreneurial bakery. She added various pastries, dog treats, and various cake flavors.

Summer just ended, which means a student owned entrepreneurial business just reopened. Nourished Bakery, an at-home seasonal bakery, is run by senior Julia Birchfield. Last year was the business’ debut year of operation and an instant hit. But, what makes the business such a sensation?

Birchfield said, “my most ordered item on my menu are any of my cakes.” And there is a reason why the cakes in particular are so popular.

In the off-season, Birchfield said, “I did recipe development trying to tweak my cake recipe just slightly.” She created a test trial system to see if any of her altered recipes were better than the one she was using in the previous year.

Birchfield explained, “ultimately I decided to stick with my original recipe because I was continuously coming back to liking it the best.”

And something she wants a lot more people to order are her specialty themed cakes, because they are her favorite thing to make on her menu. Birchfield said, “I love making cakes that are centered around the person who ordered, because these cakes are formulated around their personality.”

Birchfield continued, “It allows me to be fun and creative because I am straying from my standard recipes and designs.” But she also noted, “it makes them really happy when they receive it because the cakes are just so them. Her latest themes include a dinosaur, race car, Spider-Man, St. Patrick’s Day, and cat cakes.

And new to the bakery this year, Birchfield added a line of pastries including various flavors of macarons, macaroons, and madeleines. In addition she also introduced dog treats such as puppy pretzels, doggy donuts, and doggy Poptarts.

Reflecting back to a year in business, Birchfield’s favorite part is not the actual production of her products but rather the behind-the-scenes business and marketing aspect. Birchfield said this interests her the most, “because I want to possibly pursue something in that field in the future.The behind-the-scenes that people don’t normally see of the bakery is the most intriguing part.”

Birchfield said, “I love the freedom of starting my own business, because I can grow and develop a brand the way I want.” But being a senior in high school who will go off to college in a year, places limits on the business. “Having to stop after two years when you have so many more ideas and ways to go with the expanding business is frustrating,” Birchfield explained. “It is the difficulty of having aspirations but lacking the time to complete them.”

And her focused aspiration this fall includes trying to donate more and give back to the community in some way. In mid-September she dropped off batches of cookies at a local food kitchen. But she also donates gift cards or a dozen cupcakes to silent auctions that help at charities. Birchfield said she does it, “because it ‘bakes the world a better place and nourishes others.’”

Take a look at her craft on Instagram and Facebook @nourishedbakery. There you can find her website if you are looking to order or just curious.