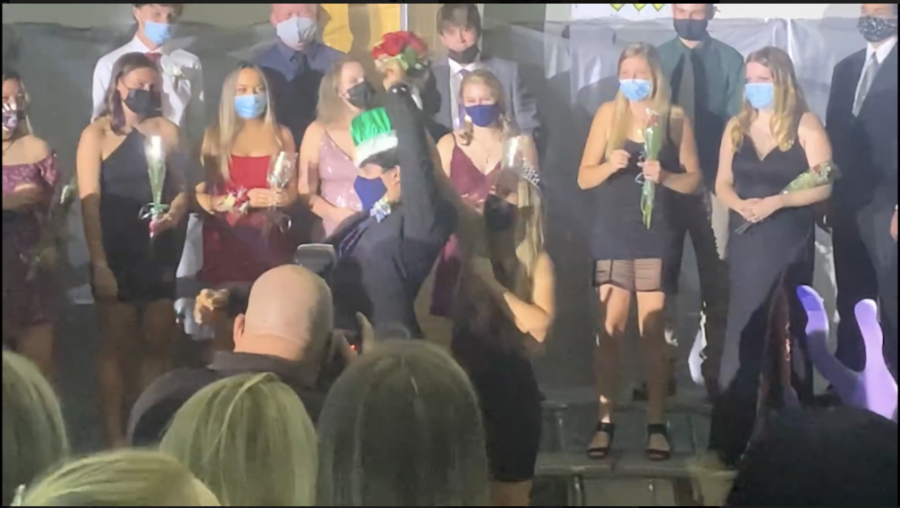 Seniors Jessica Dudok and Solomon Brundridge were announced as the 2021 Homecoming  Queen and King at the dance on Oct 9.

The queen Jessica Dudok says, “I joined Hoco court because I felt like it would be a fun experience and some of my other friends were running too so I wanted to do it with them.” Competitor Mady Rhoades added that she joined because she thought it was a fun way to be involved in her senior year especially with this being the first dance after Covid.

Solomon Brundrige said, “I wasn’t originally planning on joining.  I didn’t even know how to sign up for it, [but]my peers had persuaded me to join. I thought it would make Homecoming more interesting and I believed I had a good chance of winning, so I went for it.”

To become a part of the court, the members had to fill out and application and in prior years, the NNHS faculty picked the final 10 boys and 10 girls on which the upperclass students could vote. This year there was a lack of volunteers, and the court ended up with only six boys and ten  girls. Tonya Marks adds that “Since there weren’t a lot of people signed up there wasn’t a true ‘competition.’”

Dudok said she thinks the lack of interest stems from a lack of ability to get the information out there to people. Rhoades adds that “I feel like Homecoming court could be seen as a popularity contest, discouraging some people from joining. The fact that there is a Homecoming outside of school also may have caused people to not come to the school Homecoming.”

Marks said that she believes most people see it as a popularity contest as well, however that is not true adding that “in reality it is based on your academics and basically you as a person.”

The contestants said that they all took part in traditional getting ready activities. “I did what I did every year before homecoming, hair, makeup and taking pictures with my friends,” said Rhoades.

Brundridge adds that “quarantine was a hard time for everyone, coming back from such an isolated period affected our mental [health and confidence. I think such a drastic change had most boys trying to recover and return to normal school, which had lost their focus from social events such as Homecoming.”

Marks mentioned that there were less people that attended the dance than past years. She said that this aspect was fun, however, because she could mingle more, “combining friend groups and dancing and talking with people I don’t talk to on a regular basis.” Rhoades said that it was easier to dance than years past due to the fewer number of attending students which she enjoyed.

Brundrige describes the crowning moment by adding “I felt confident in myself as they crowned me, knowing that there were people in this school that believed in me enough to vote for me was relieving as well as surprising.”

When Dudok won she said, “I was a little overwhelmed when I won because there were a lot of people watching. I also knew how badly some of my other friends wanted it, so I really wanted them to be down there with me.”  She added that iIt’s kind of weird when people congratulate her because she feels like she “didn’t do much to win and anyone else deserved to win just as much as me.”

Dudok also added that she feels like “Solomon break dancing during the slow dance will go down in history.”