Cry of the Hawk • November 18, 2021 • https://cryofthehawk.org/news/2021/11/18/north-harford-renaissance-grand-success-becomes-possible-new-school-tradition/ 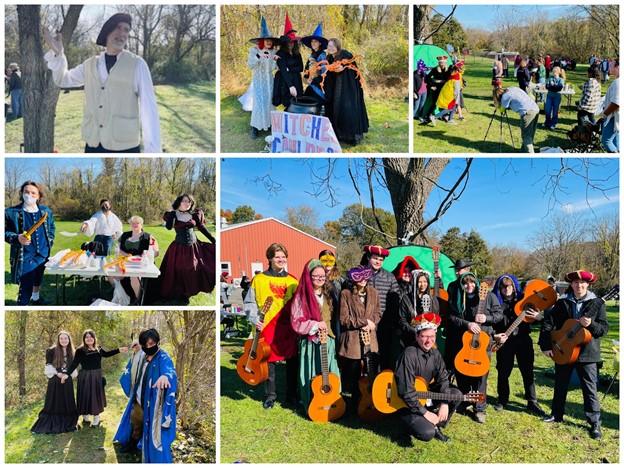 With the North Harford Renaissance now in the past, there is consideration on making it a new tradition for the school, as a new unique staple of the drama program.

The event itself had a large turnout, with Mrs. Nancy Green, the drama teacher and event coordinator, receiving 15 boxes of canned good donations throughout the 3 hour event, which will be donated to Mason Dixon “just in time for the holiday,” she says.

The goods were used as payment by the door, each guest required to bring two, unless they were in costume, in which case they only had to bring one. Each guest got to decide which prince or princess to hand in their donations to, and the one who had the most was crowned king or queen of the event. In the end, Senior Alyssa Alford was crowned queen, who gave a brief ice-cream related coronation speech.

After payment, guests would be lead by a characterized tour guide to the various performances or stands.

The Journalism booth was the first stop on arrival, where Mrs. Chandler gave out free clothing and sold homegrown peppers.  The journalism kids did hand painting, mask making, and had a photobooth in front of a green screen  with a large selection of costumes.

In the outdoor classroom section, guests could sit to eat food from the Eats n’ Sweets stand that sold burgers, Kona Ice, or the popular peppermint hot chocolate served from the food trucks. While eating, they could enjoy various Shakespearean performances held by the drama club.

Other performances and characters included the bickering Romeo and Juliet, entertaining jesters, and the four witches that were making a mysterious concoction at the entrance of the haunted Shakespearean graveyard trail.

In the background creating ambience were Mr. Wojo’s guitar ensembles who played renaissance themed tunes for the first half, and then Ms. Hemling’s harmonics put on a performance during the second half. “The musical components completely added to the atmosphere and gave performers in some of our smaller musical ensembles an opportunity to shine,” Green reflects. As an environmentally themed event, she believes the music, along with the many characters dressed in Renaissance attire, carried the festival to success.

The drama teacher hopes to carry on the event as a tradition, and improve it every year. “I would love to see more classes — English and History get involved- there is so much room to develop and add components to an event like this. It has great potential,” she says.

Green would also like to thank drama club president senior Chloe Romm, the many clubs that participated, Mrs. Anderson, Mr. Green, and Mr. James, who played as Shakespeare himself. “I was very proud of all of the students for being creative and hard working and brave enough to try something never been done here,” she concludes.