Cry of the Hawk • October 19, 2021 • https://cryofthehawk.org/showcase/2021/10/19/firefly-festival-take-place-in-fall-features-of-tame-impala-as-well-as-billie-eilish/ 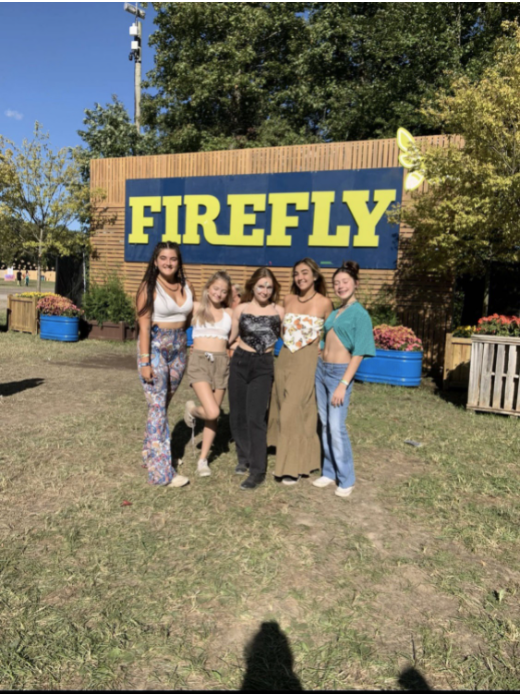 It has been 823 days since the last Firefly Music Festival. But finally live music has returned.

Senior and festival attendee, Kylie Sauer said, “COVID made it really difficult for a long time to have those kinds of experiences, so it was really nice to be back on an adventure with all of my best friends.”

In the past, Firefly was typically held in mid-to-late June. But because of COVID guidelines, the festival was postponed to September 23 through the 26. Sauer commented, “I think it’s nice [to have the festival at either of the dates] because either way it’s typically not too hot or too cold at either time of the year.”

Headliners included Billie Eilish, The Killers, Tame Impala, and Lizzo. Senior Emily White said her favorite performer by far was Tame Impala. “They had the best music and energy. Also, they had the best set with lighting that made being there feel unworldly,” White told.

More of the lineup included Wiz Khalifa, Roddy Rich, Diplo, Glass Animals, and Machine Gun Kelly. Alumna Haley Welsh said, “I really liked MGK, he had a lot of energy and he was super friendly with the audience. You could tell he really wanted his fans to be part of his performance.”

Not only did the festival have musical performances but also amenities, such as the “Thicket” Silent Disco.

In a silent disco, participants are given wireless headphones to listen, sing, and dance to various DJ’s; contrary to the traditional rave atmosphere where music is pumped through external speakers. “I thought it was a cool idea and it was especially stunning in the dark,” Welsh noted.

There was also the North Hub Beach Club featuring a tiki bar, DJ performances, beach volleyball, a waterslide, and a Roller Rink.

The Bazaar Central Market provided a shopping experience, highlighting an array of boutiques of clothing, jewelry, and handcrafted memorabilia. White explained, “I do appreciate the thought of including alternative things to do. I feel like it helped ease some of the crowds.”

And the 31 various Food vendors, received great reviews from the attendees. Welsh agreed, saying, “it was about a 50/50 experience.” The only downside Welsh said was that, “it was super expensive. I just wish the only pizza there wasn’t $55 and was more affordable.”

The weather threatened the opening of the festival on Thursday due to extensive weather but ended up delaying the opening until 7 p.m.

White explained, “The rain didn’t stop us from having a great time. It was really cool to see everyone dancing in the rain and making the best of the situation and making it more memorable. We stayed at the pavilion most of the first night because it was covered, but we also went off to some of the other stages.”

There were a total of seven stages. Besides the main stages, there were intimate ones tucked away in the trees called The Treehouse, Bud Light Seltzer Session stage where smaller artists can perform and interact with fans, and a continuous DJ stand called The Nest.

Sauer said “my favorite part of the whole weekend was just getting to spend time doing something once in a lifetime with some of my best friends. I would go back again next year and I think it would be fun to make it an annual tradition for my friends and me, even once we’re in college!”