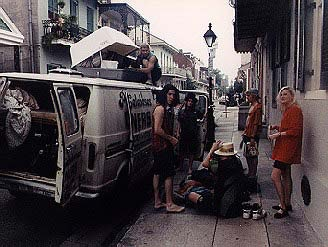 The band was leaving, “New Orleans heading to Texas in 1989.”; He is still in contact with many of the friends that he met along the way.

If you were asked to drop everything and travel the country with some friends who had recently formed a band, would you do it? Well, for DJ Bailey, the dad of sophomore Noel Bailey, he did just that. He said that one day some of his friends who were in a band called NOFX, “played in Baltimore and needed a place to crash for a few days, so they stayed at […] [Bailey’s] apartment.”

When the band was ready to leave, they asked Bailey if he “wanted to go with them and move to California.” Ready for the new experience he grabbed his “backpack and skateboard and rolled out.”

The band “formed in 1983 in Los Angeles,” with members named Fat Mike and Eric Melvin, who were Bailey’s friends that he would, “see local punk rock bands with.” He explained how Mike was on the “bass guitar and sang, while Melvin played guitar.” Eric Sandin came into the picture when they met him “at a show,” and he became the band’s drummer.

From Bailey’s time as a “band roadie from 1987-1994 [he got to travel all over the] US, Canada, and Mexico six months out of a year at the age of 18.” Bailey remembered how, “Canada was definitely cool and so was out west. […] [He has] been to all the major sights in the US and stumbled across some smaller ones along the way.”

The most memorable part about his travels were, “all the people […] [he] met along the way.” He described them as, “just so unique and creative” and it was not the people as individuals that stood out to him, “but how they represented the whole music scene in general.” In Bailey’s opinion, “it was a time in music that will never be repeated.”

One of the more memorable experiences was the time his band accidentally kidnapped the lead singer of the band Green Day. Bailey described how NOFX was playing on, “Gilman Street in Berkeley, California and Green Day was opening up for […] [them]. Nobody knew who Green Day was back then and Billy Joe was sleeping in the back of his van.”

After asking to borrow someone’s car to run to the store, they “took Green Day’s car by accident because the keys were in it.” After driving away, “Billey Joe [,the lead singer,] woke up freaking out” but calmed down once he realized who was driving the van.

Bailey revealed that when he sees Billy Joe, “the lead singer still tells the story.”

Traveling with the band was a perfect opportunity for Bailey because he claimed that “music has always been a huge part of” him and he “started vowing to see bands at 12 years old.” Despite the group being like “a dysfunctional family,” Bailey “learned a lot” about himself and what he could do on his own.

Bailey said, “you never knew what to expect and the best part of music is the people behind it.”