Cry of the Hawk • November 19, 2020 • https://cryofthehawk.org/sports/2020/11/19/aiming-for-victory-alumnus-competes-in-international-trapshooting/ 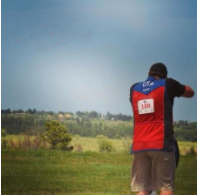 Adkins lines up his shot to hit the clay disk that was just launched into the air. He struck the disk perfectly, and shattered the target.

For most athletes, they choose from the sports offered within their high school like soccer, lacrosse, football etc. However, NH alumnus Jeremy Adkins chose a different sport– trapshooting. Now, Adkins competes on an international team.

He explains, “in its basic form it’s shooting a randomly angled flying object with a shotgun from different positions 25 times. It’s more reaction and instinct based.”

Adkins started trapshooting in his sophomore year of high school. By his senior year in 2015, he was introduced to international trap. Adkins explained, “It is American trap on steroids. Smaller targets, faster targets, harder angles, and you only have about one point eight seconds to hit the target before it’s out of range.”

Traveling across the country for competition, Adkins stated that he joined an Olympic team called The Keystone Eagles which was near Harrisburg, PA where they competed in national competitions. “I had the opportunity to represent the United States in Germany for the Munich Grand Prix, where I tied for seventh and my teammate got fourth plus, we ended up getting third in squads,” said Adkins.

No matter his success rate, he commented that, “after about four years with The Keystone Eagles, we parted ways and I’ve been an independent team since then. I honestly don’t know what my biggest achievement is because my end goal is to get to the Olympics, until then I don’t think anything will be enough.”

“In my peak season I’ll go through 250-300 shells a session, usually about once a week. Then I usually go out and compete against people who do that about every other day,” he states. Currently, Adkins is ranking in the top 30 Olympic shooters in the US, in the top ten on the East Coast, and the top shooter in Maryland, he states his hopes are high to achieve his Olympic goal. He added, “Just last month I won the Maryland state championship in American trap.”

From his experience in the sport, he claims the best thing he has learned is, “good things don’t come to those who wait. It comes to those who persevere through the struggles and chains holding them down to reach the goal they have set for themselves.” With maintaining this attitude, Adkins stated it allows him to keep going and working towards his Olympic dream.

According to Adkins, “This sport has changed me significantly over the years, I went from a very shy, quiet, background person with no friends to a very social, confident, and outgoing person with friends across the globe. It has opened up doors I never thought were possible and I wouldn’t change a thing about how much I’ve dedicated to this sport.”